Ford is serious about furthering itself in the off-road market. The automaker recently filed a patent application for a “retractile tail pipe” designed to make off-roading easier. Basically, the tail pipe tip can extend and retract for clearance.

According to the patent application:

While many newer vehicles already have short pipes, they can affect the sound and appearance of the vehicle so having a regular pipe than can be retracted may be a solution.

It’s reported that Ford filed the patent back in April of 2020, however it was just finally published at the beginning of October. Guess we’ll have to wait and see if this actually makes it into production.

Images and Story Courtesy US Patent and Trademark Office, Carbuzz

Ford Looking To Move Away From Crowded Dealerships, Towards Online Ordering 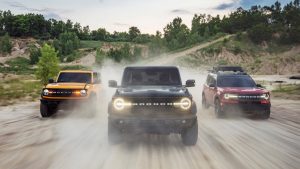