Bobbie Carson is no stranger to owning Corvettes. But he was disappointed to learn his eighth Corvette, a 2022 Arctic White Stingray, would be significantly delayed due to Covid and production issues. Being that Carson is a 95-year-old WWII vet, time is of the essence.

Carson ended his teenage years fighting in Germany at the end of WWII. He has been a Corvette fan for years, owning seven and belonging to his local Corvette Cub. When his Club friends and local Lebanon, Missouri, dealership got a hold of General Motors, they got to work moving Carson to the top of the list. Chevy was able to secure a build slot for Carson on Sept. 6th.

Normal wait times for the Stingray are as long as two-years, however Carson only waited 30 days. Local Bowling Green, KY news WNKY met up with Carson at the National Corvette Museum on Oct. 1 when he received the keys to his car.

Carson says this vehicle will absolutely not be sitting in his garage collecting dust commenting, “I think it’s the greatest car I’ve ever driven.” We can think of nobody better to receive the 42nd 2022 Corvette ever built.

Man Finds Over 150 Pounds Of Walnuts Hidden In His Truck 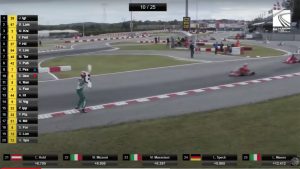