Anything can happen when you’re a police officer on duty. While two police officers were monitoring traffic in Bellefonte, PA, dashcam video captures a rogue tire falling off a passing truck and smashing directly into the cruiser’s windshield.

“Luckily the tire struck the cruiser and then launched in the air off to the opposite side of the road instead of traveling into the opposite lane and striking a moving vehicle coming in the other direction,” the Spring Township Police Department said in a Facebook post. “The cruiser suffered some extensive damage but both officers and the driver of the truck were not injured.” 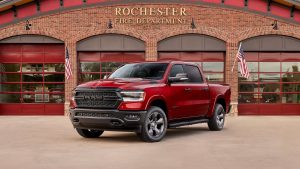