In the spirit of Thanksgiving, check out this video from Dwayne ‘The Rock’ Johnson. He chose to give away his Custom Ford Raptor to a fan at a screening of his new movie Red Notice.

Johnson hand-picked the fan, Oscar Rodriguez and called Rodriguez up to the stage at the screening. He highlighted why he chose Rodriguez listing all the good things the Navy veteran does for his community. When he was done, Johnson ushered Rodriguez outside and handed him a note reading “Thank you for your service, brother. Enjoy your new truck.” He then gave Rodriguez the keys to the custom Raptor.

Johnson said the original plan was to give away the Porsche Taycan that he drove in Red Notice however, Porsche, but they said that wasn’t an option. Determined to still give a vehicle away, he decided to give away his personal custom truck as the gift.

Johnson says in an interview with ABC 7, “It’s an honor for me to give a little joy to a dude who probably deserves a lot more than just my truck. Now I can figure out how I’m getting home.”

Man Finds Over 150 Pounds Of Walnuts Hidden In His Truck

Check Out This Ford Bronco 6×6 With Third Row Seating 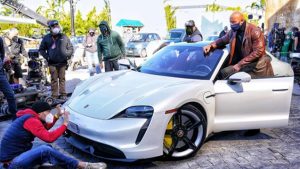