It’s no coincidence that major metropolitan cities like Los Angeles are magnets for car accidents. Some places just happen to have more crashes than others. But during a live news feed, a car crash happens on-camera while KTLA reporter Gene Kang was covering a story about a fatal crash that occurred at Hoover & 84th Street.

“I was covering a fatal hit & run story yesterday,” Kang said in a tweet. “I was pointing out one of the most dangerous streets in Los Angeles (Hoover & 84th Street) – then this happened!” Kang and his camera crew assisted the victims struck by the reckless driver and provided the license plate to the Los Angeles Police department.

Kang said that the Honda began heading towards him and his crew but steered out of the way, hitting the other sedan before it jumped the curb and sped off in the same direction it came from. 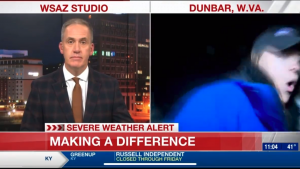