RTM Studios, the producer of POWERNATION and subsidiary of Gray Television, is partnering with Circle TV, the Grand Ole Opry, and other local stations Saturday night to raise money and feed those affected by the recent extreme weather and food insecurity due to the ongoing pandemic.

All proceeds raised during a live Grand Ole Opry broadcast, slated for 9:00 p.m. (EST) on Saturday, February 27th, will be directed to Feeding America, an organization responsible for supporting 200 food banks and over 60,000 food pantries across the United States.

Country artists Travis Tritt, Chris Janson, and Hailey Whitters will perform during the live broadcast, which will be hosted by Bobby Jones.

“Food insecurity is something no family should experience,” said Gray President and Co-CEO Pat LaPlatney. “Our goal is for the power combinations of Gray’s local stations, the voice of the Grand Ole Opry and Circle’s growing network to have a positive impact for those who so badly need help.

You can watch the event on Circle, Gray Television stations, DISH Studio Channel 102, Sling TV, and other TV affiliates. You can also stream the event on Gray’s page, Facebook, and YouTube.

“For 95 years, the Grand Ole Opry has always tired to be a source of comfort and support in difficult times,” said Dan Rogers, vice president and executive producer of the Grand Ole Opry. “When Gray Television developed this effort, we enthusiastically lent our support.”

“Circle’s mission is to unite country music fans with storytelling and performances from the artists they love,” said Circle Network General Manager Drew Reifenberger. “Part of this responsibility is to use our platform to rally around important causes that our fans and artists are passionate about as well.”

You can donate here.

Where to Watch POWERNATION in 2021

So, Is the Grand Wagoneer A Jeep Or Not? 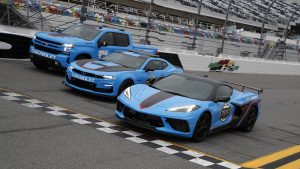 Chevrolet to Bring Special Line of V8s to Daytona 500

Ford is Starting Production on This Pickup That Will Start Under $20,000