Trucks are designed for towing heavy stuff and working hard, but this is on another level. We recently heard about the 2021 Ram earning the top towing crown with their 3500 model, and fans were pleased with the brute force engineers could squeeze out. In another piece of good press for the brand, an older-model Ram did something unprecedented by towing a 140,000-pound logging truck that appears to have broken down in the middle of an intersection.

The video takes place in Williams Lake, British Columbia, and a good samaritan in a Ram comes to the rescue. Depending on how the truck fared after towing all that weight, we’re hoping this good gesture didn’t end up as something bad for the Ram owner.

Canada is well-known for its citizens helping anyone in need, but this person was willing to sacrifice their truck and potential livelihood to ensure traffic flowed smoothly and the log driver didn’t cause a log jam. The Ram was well outside of its weight class, but as you’ll see in the video, that didn’t seem to matter.

As you might expect, the Ram initially has some trouble getting to a roll with the enormous load behind it. You can see some white smoke pouring from underneath, and it doesn’t look like soot from the exhaust. After a bit of a struggle, you can see the Ram rolling through with the logging truck in tow. The third-generation Ram, which is likely a heavy-duty 2500 or 3500 model, rolls through and helps clear the large load from blocking traffic.

Not seeing any black smoke under load from the exhaust leads us to believe it’s not a diesel, meaning the Ram is packing a 5.7L V8 with 345 horsepower and 375-pound-feet of torque. This is even more impressive if that’s the case. We hope it’s only tire smoke coming from the passenger wheel, but it’s difficult to tell based on the angle. It could also be clutch smoke if the truck is manual, certainly within the realm of possibility.

We’re hoping the truck driver did something to show his appreciation and that the Ram didn’t sustain any damage in the process. Would you put your rig through this if you were in the same situation?

Which U.S. States Drive the Most Pickup Trucks? 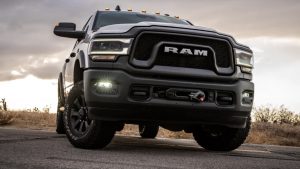 Ram Asking 130,000 Truck Owners To Park Outside During Recall

Wiring Hacks to Get Our Road Runner Amped Up - Part 5
Season 9, Episode 6
Close