Anyone that has visited a dealership to purchase a new vehicle is aware of the ongoing supply chain issues due in part to the global microchip shortage and production shutdowns. As demand remains high and inventory continues to disappear, many dealers have had to price new vehicles above MSRP (Manufacturer’s Suggested Retail Price) while eliminating incentives.

According to data collected by iSeeCars, 1.9 million car listings were analyzed and it was found that an average new vehicle is priced 10% above MSRP. Of course, some models are marked up well above 10%.

“Dealers have responded to market conditions by pricing cars above MSRP making a higher profit on specific models to help offset lower sales volumes from restricted new car production,” says iSeeCars Executive Analyst Karl Brauer. “In today’s market, consumers are willing to pay well-above sticker price for new cars because inventory is so scarce and because they know that new car pricing is not expected to improve until 2023 at the earliest.”

The top 15 vehicles with the highest markups showed numbers 1.8 to 2.4 times higher than the 10% average.

Of the top 15, three slots belonged to Jeeps with the Jeep Wrangler taking the top spot at 24.4% (or $8,433) higher than MSRP. The other two slots belong to its 4-door rendition, Jeep Wrangler Unlimited, and its pickup version, the Jeep Gladiator, both of which are also priced at least $8k above MSRP.

Another marked-up vehicle on the list also happens to be Jeep’s rival, the Ford Bronco. The off-roading SUV has been in such high demand that Ford has had to put many orders on an ever-growing waitlist before closing its order books for the 2022 Bronco in May. Since then, it has begun taking orders for the 2023 Bronco starting in August.

A significant number of vehicles taking up nearly half the Top 15 list are luxury SUVs like the Porsche Macan, the Genesis GV70, the Lexus RX 350L, and the Genesis GV80. Demand for some of the hybrid versions of these vehicles may be due in part to rising gas prices with markups reaching as high as $16k over MSRP.

Check out the Top 15 most marked-up vehicles in the list below:

Top 10 Cars That Are The Best at Holding Their Value 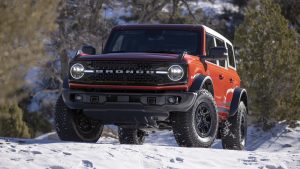