Reaching the foregone conclusion of selling something like your Corvette isn’t a decision made lightly. For some, merely achieving ownership of such a car is a dream they’ve yet to accomplish. For others, however, after a few years of owning one, they’ve lived that dream, and they’re ready to move onto greener pastures. That was the case for the former Corvette owner, Spencer Everette, from Greenville, North Carolina. Unfortunately, this doesn’t have a happy ending.

News affiliate, WITN, reported on Spencer Everette and his last “hurrah” in a once beautiful C8 Corvette Stingray before he decided to sell the car. Everette needed to experience the C8 in all of its glory before selling it, which we understand. He was traveling down Highway 11 in the area when he decided to call the potent V8 into action by activating all of its 490 ponies. It was a decision he’ll regret forever. Despite owning the car a few years, it proved to be too much. He lost control and rolled it into a ditch.

Rescue crews were dispatched to the scene, where they stumbled upon the once gorgeous and wrecked C8 Corvette Stingray on its side. The used car marketing is soaring, so it’s possible he still gets a good offer. “One owner, low miles, minor damage.” It’s a stretch, but we said possible not probable.

Everette stuck to his story and told police it was his final drive before selling the car to a new owner the next day. Video captured at the scene by the local news affiliate, which can be seen below, shows the Silver Flare Metallic Corvette with severe damage. The Corvette went from zero to worthless in the same time it takes to reach 60, but the owner is lucky to walk away with his life. However, he’s facing some pretty hefty charges for his poor decisions.

The North Carolina Highway Patrol charged Everette with reckless driving for his stunt. While it remains a mystery how he lost control, we’re under the impression the traction control was off. It’s a bad situation all around, but one that’s completely avoidable. While propelling down a highway is never a good idea, especially when you have nearly 500 horsepower at the tap of your foot, maybe avoid flooring your car the day before you sell it? Food for thought.

This Corvette went from zero to worthless in a split second. >> https://t.co/8zLokq4o3m pic.twitter.com/vYl9UQZY3y 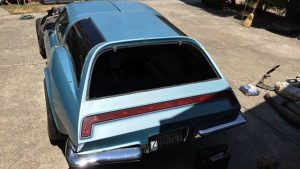 When Car Meets Go Wrong: Silverado Driver Fails Donut Attempt and Snaps the Wheel Off His Truck
Man Tired of Speed Bump Smashes It and Gets Fined by the City